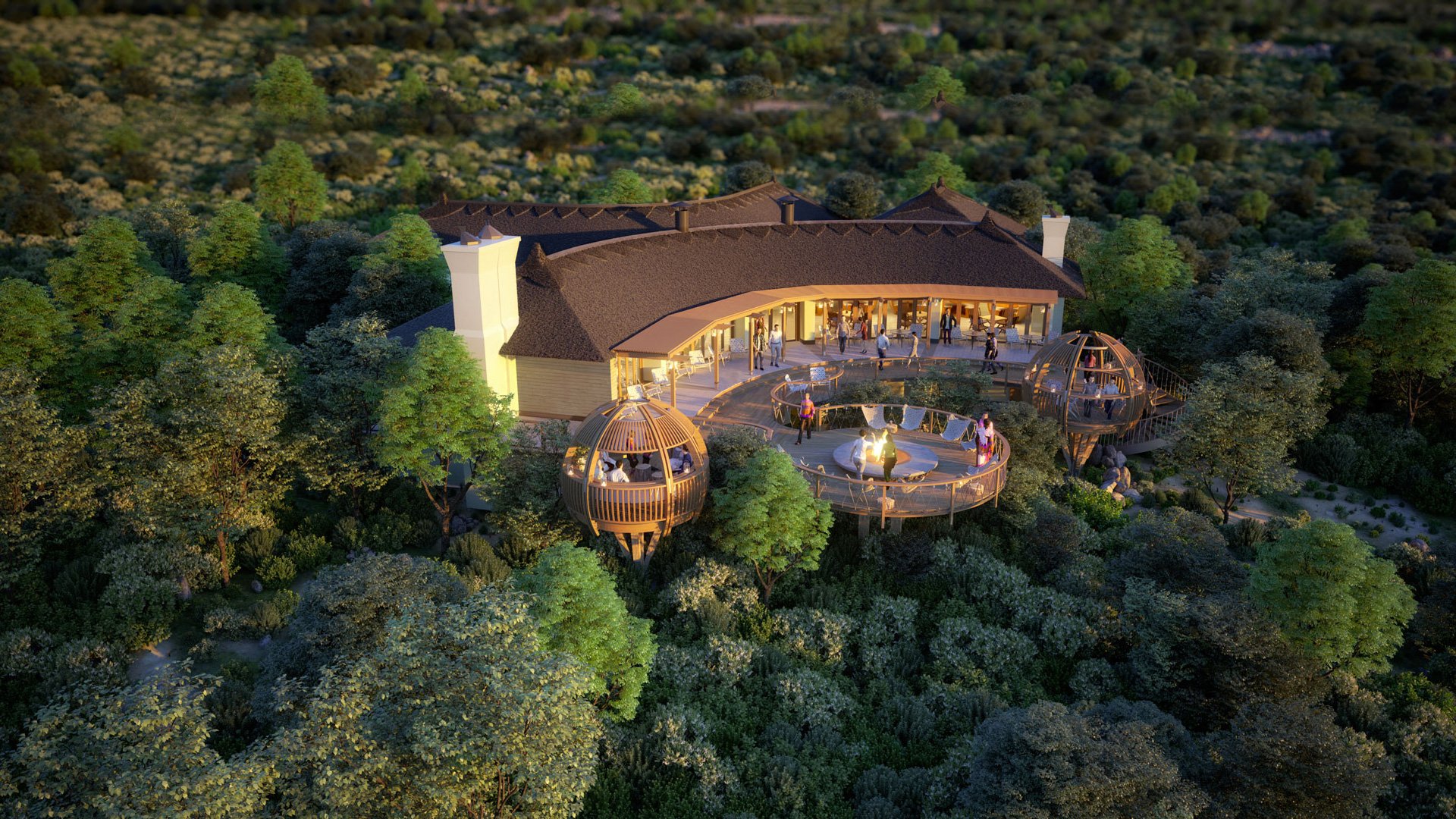 Across the waning plains and astounding landscapes of Africa, an abundance of wildlife is to be witnessed and cherished. There are thousands of safari experiences to be had across the continent, although South Africa has something really special to offer. These are the seven best safari experiences you’ll find in and around South Africa… Including what you’ll be able to see – and where you’ll be able to see it! 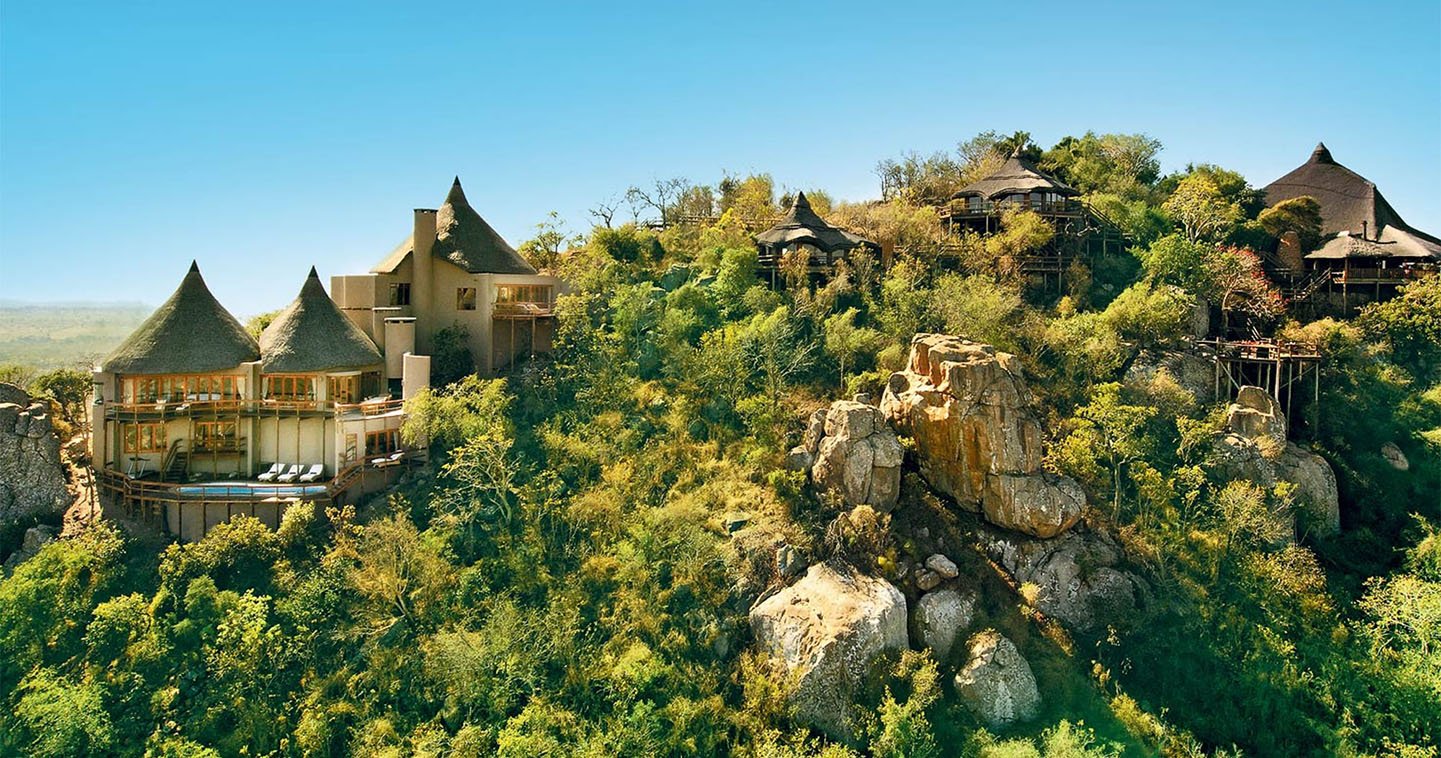 Starting with arguably the most famous South African game reserve, we have Sabi Sands. Located adjacently to the Kruger National Park, Sabi Sands offers safari experiences like no other. Their unparalleled landscape boasts wide-open game viewing of The Big Five, along with over 300 bird species. Add in their five-star luxury lodges for you to soak up the late African sun and it’s something of a dream.

Sabi Sands is particularly well known for their leopard sightings, which can be hard to come by for the rest of South African safaris. Due to this, they offer a once-in-a-lifetime photographic safari. This guarantees you return home with stunning captured memories of your time on safari. All safari experiences are included in their accommodation rates, providing the ultimate advantage of staying on a private game reserve. 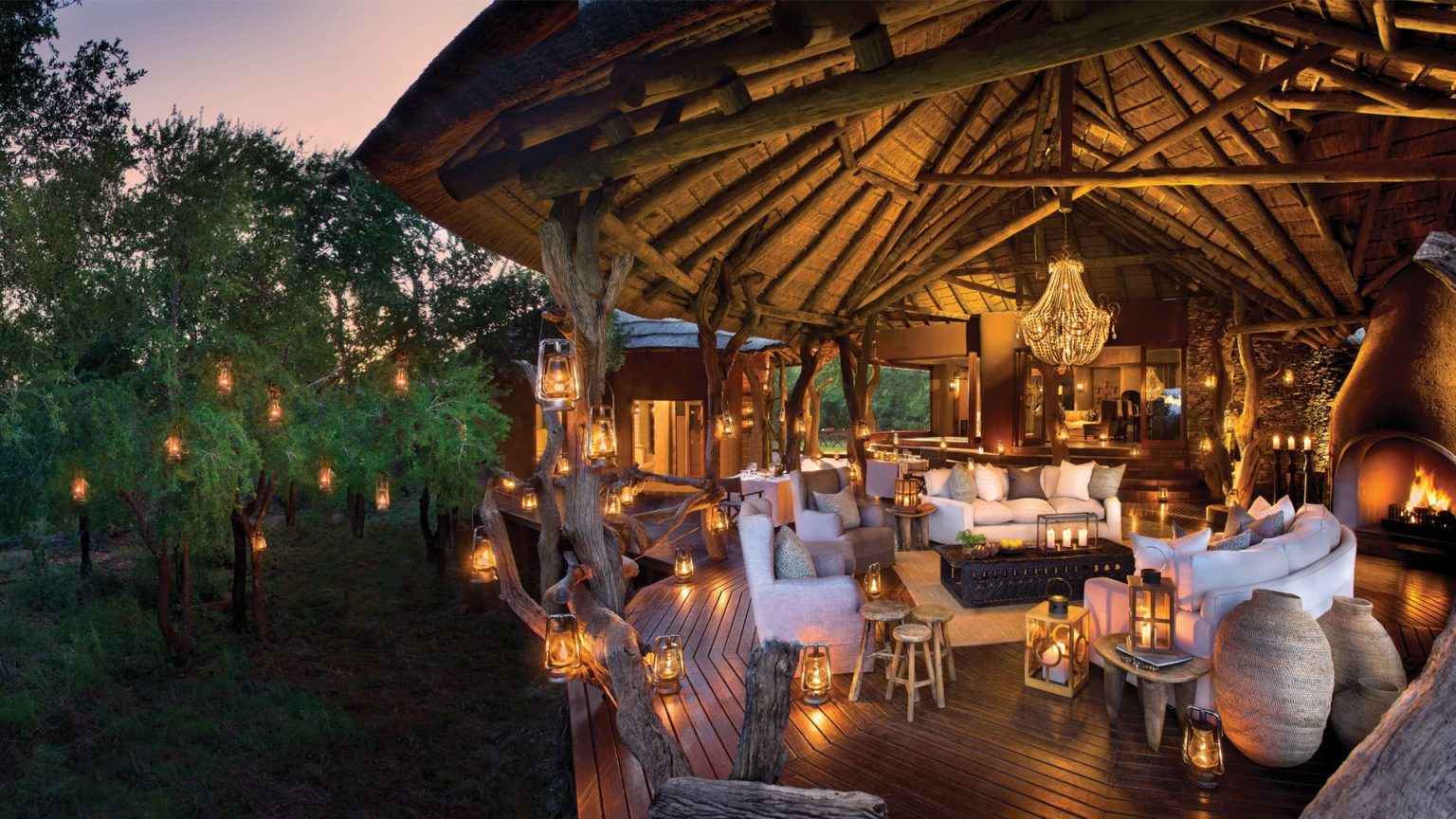 With over 75,000 hectares of breathtaking panoramic views, Madikwe Game Reserve offers a rich history and a bounty of wildlife. Madikwe prides themselves on being the fifth largest game reserve in South Africa, with a low concentration of game vehicles to provide the best possible safari experience. Fewer vehicles typically mean a clearer viewing space and higher chances of a unique sighting. This family-run game reserve features three outstanding lodges, all with the signature of Mother Nature.

Their home is welcome to The Big Five and over 350 bird species. Guests are invited to explore Madikwe with a field ranger by day and bask in the African ambience at night to take in the game-filled, sweeping views. Madikwe takes bush dining to the next level, with private chefs catering to all dietary requirements. If you’re feeling adventurous, there’s even fresh breakfast served in the boma! All accommodation rates include meals, two daily game drives, bush walks and WiFi access in public areas. We doubt you’ll need it though! 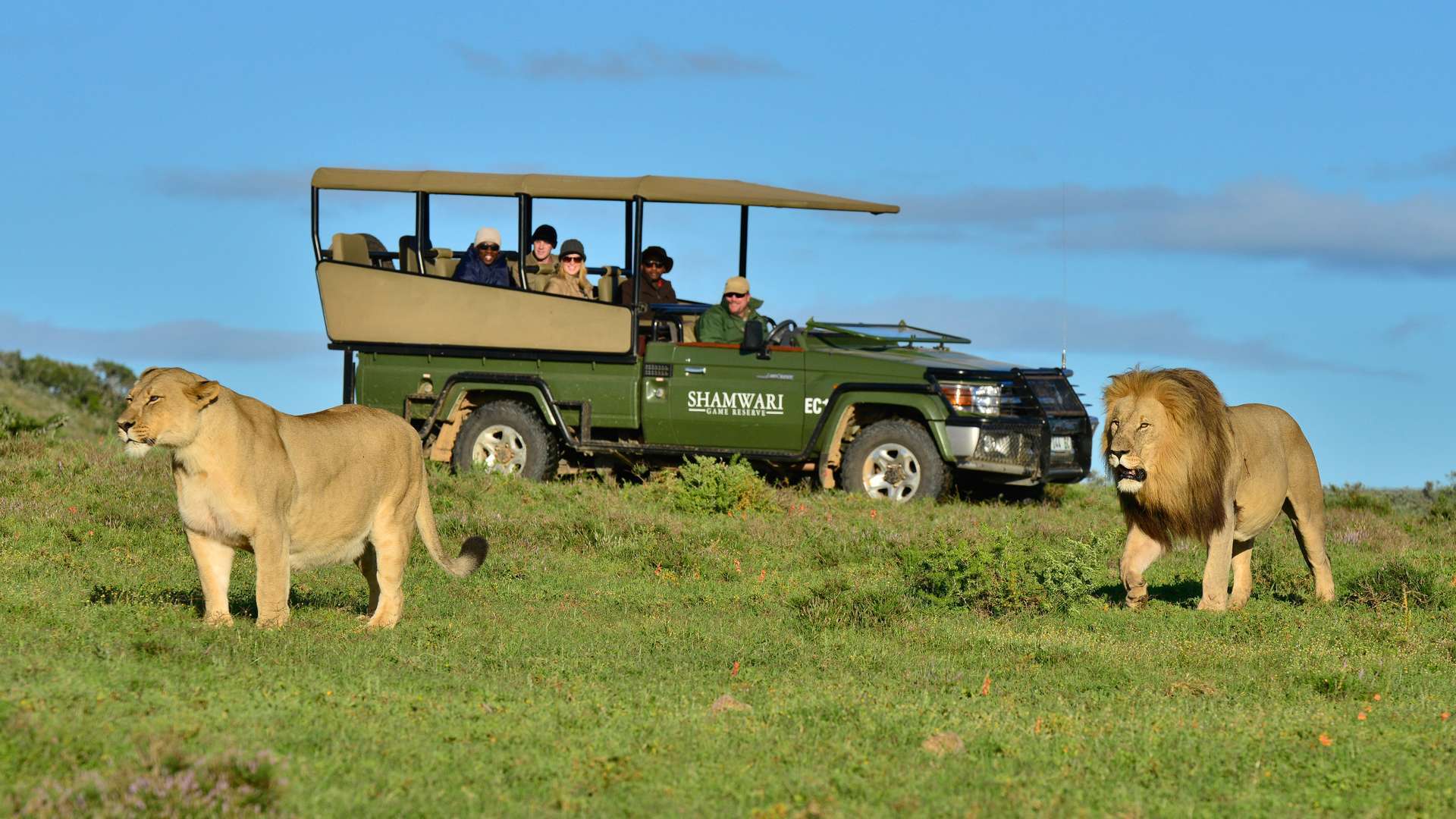 Nestled in the heart of the malaria-free Eastern Cape lies the home to five of South Africa’s seven biomes, Shamwari Game Reserve. Back in 1990, a small 1200-hectare farm was purchased despite the ongoing drought. As it worsened, more farmland became available and further land was acquired. Today, it’s an award-winning piece of protected land and they are considered as pioneers in environmental education. They spend avid time teaching the need to conserve wildlife, along with ecological diversity. In addition, Shamwari has focused their energy on restoring wildlife, flora and fauna in the area.

Along with their various eco missions, their reserve features: Seven luxury lodges, two education and rehabilitation centres and one explorer camp, employing more than 300 local staff. Shamwari offers a range of safari experiences, with game drives occurring at sunrise and sunset with their hugely knowledgeable game rangers. Naturally, the guided bush walks are a real crowd-pleaser, too! 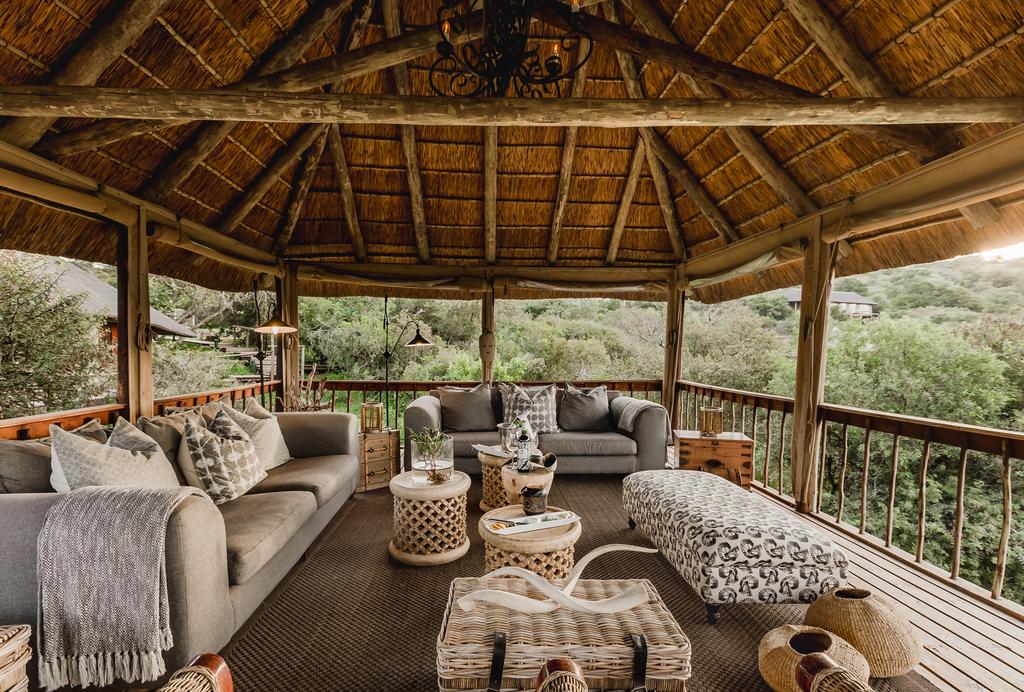 Renowned for their conservation efforts, Amakhala Game Reserve is yet another stunning offering from the often-overlooked Eastern Cape. Amakhala offers accommodation in country houses, safari lodges and tented camps in various locations making up the bulk of the 8,500 hectares of land.

When it comes to their safari experiences, Amakhala offers both day and night game viewing trips, under the guidance of their field rangers. You’ll be able to see the majority of The Big Five, as well as many giraffes, cheetahs and various antelope species. Amakhala also invites all guests to contribute to their Conservation Levy. It’s an initiative in place to help protect the ever-threatened Rhino, and a cause well worth supporting. 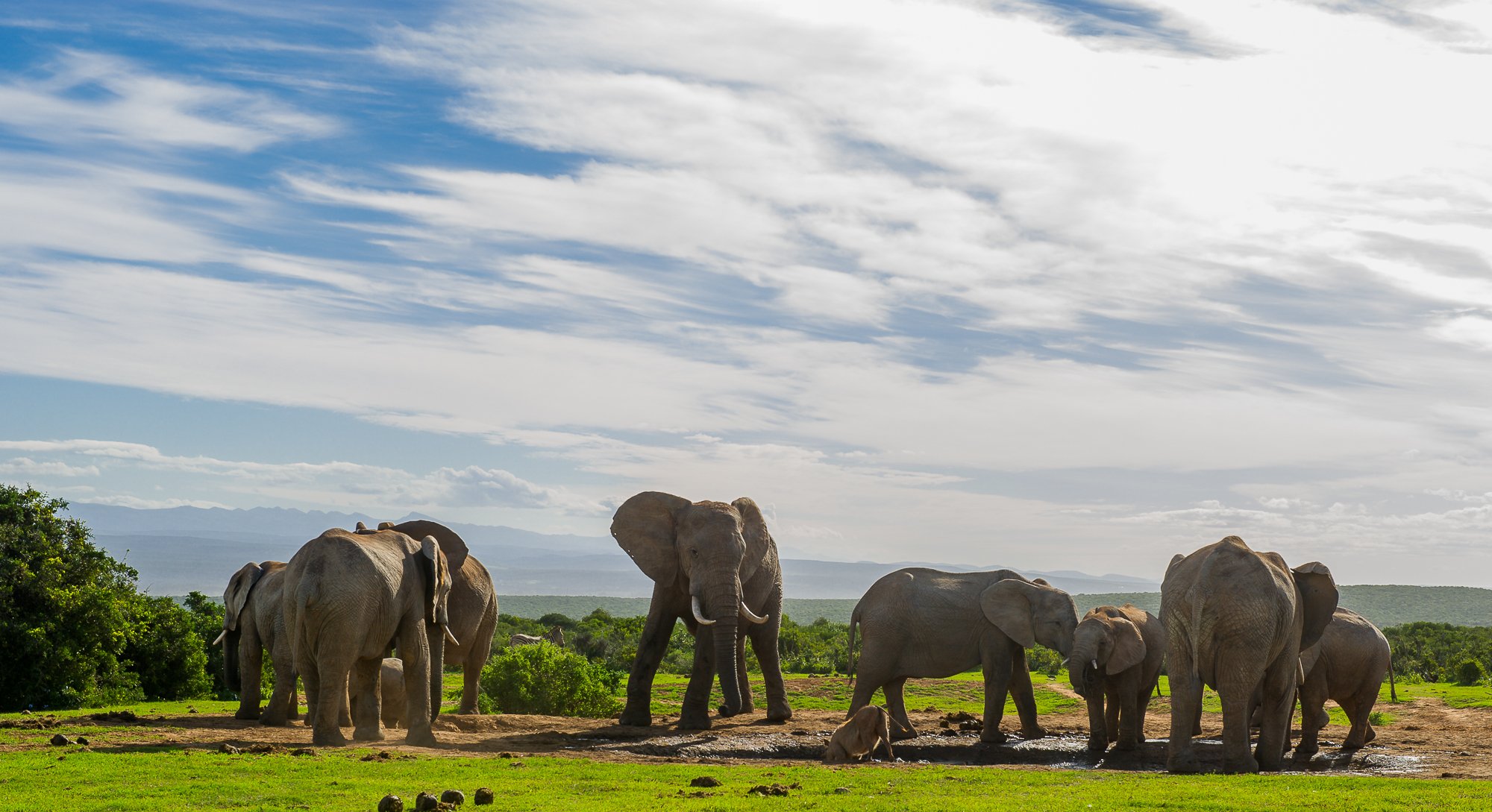 While Addo is famous for its elephants, the national park offers encounters with the rest of The Big Five, as well as many other wildlife species. Addo Elephant National Park is currently the third-largest game reserve in South Africa, and it shows! Tourists come from all over to watch a group of Ellies parading across their home turf. Addo offers open vehicle game drives, which are the best way to get up close and personal with the majestic elephant. Don’t worry – you’re sure to be protected by one of their deeply experienced game rangers!

There are many luxury safari lodges in the area to choose from and no shortage of remote settings for you to enjoy. In addition to their daytime offerings, Addo features a night game drive, for those feeling a little more adventurous. Here you can witness the sounds of nocturnal animals awakening, and potentially spot a rare sighting or two! 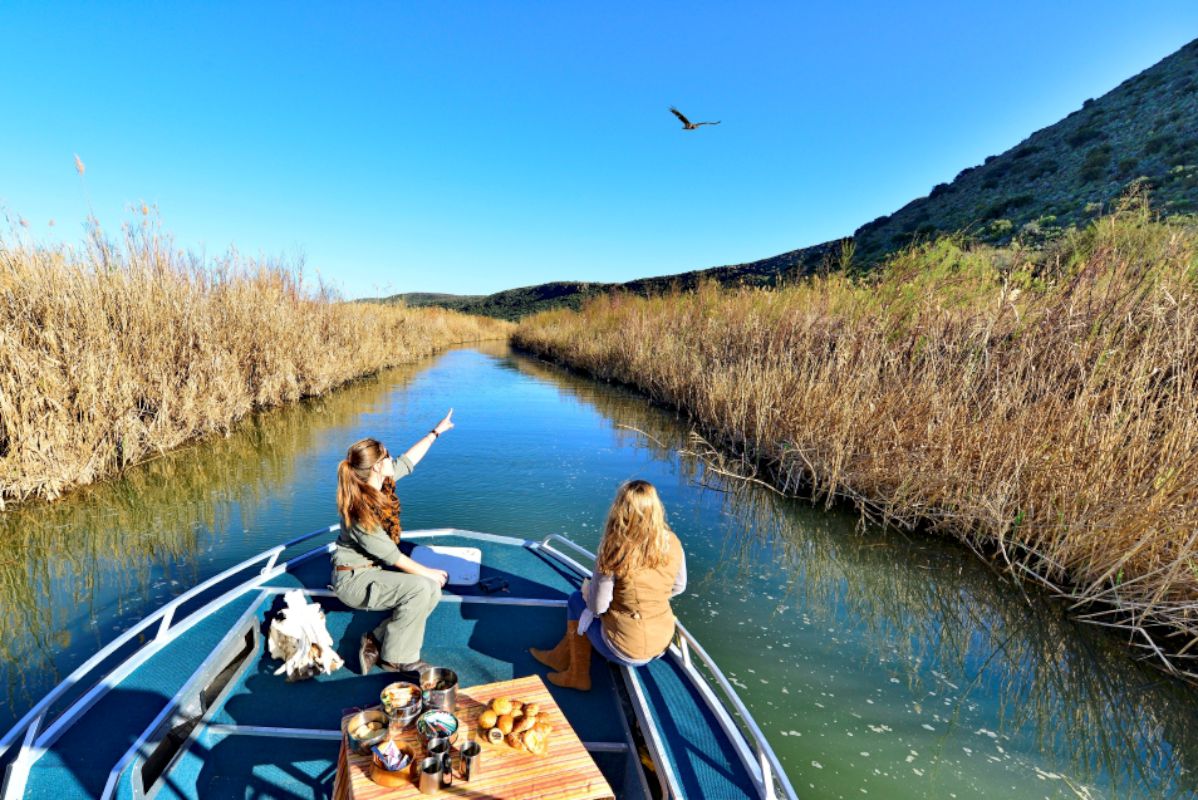 Deep in the midst of the Warmwaterberg Mountains lies the Sanbona Wildlife Reserve, in the heart of the Little Karoo. Sanbona boasts over 58,000 hectares of vast mountain ranges and never-ending savannahs. Just three hours outside of Cape Town, Sanbona WildlifeReserve is waiting to show you their wide diversity of indigenous flora. Along with their stunning fauna, they have rare San rock art on-site, dating back more than 3,000 years.

Unlike many other reserves, Sanbona offers a unique boat safari. Guests have also been known to contribute to preserving its wilderness to support their conservation. Sanbona may be less traditional than your typical Big Five game reserve safari experience, although it certainly makes up for it! The bountiful landscapes, inviting stillness amid its raw beauty are truly something quite spectacular to behold. 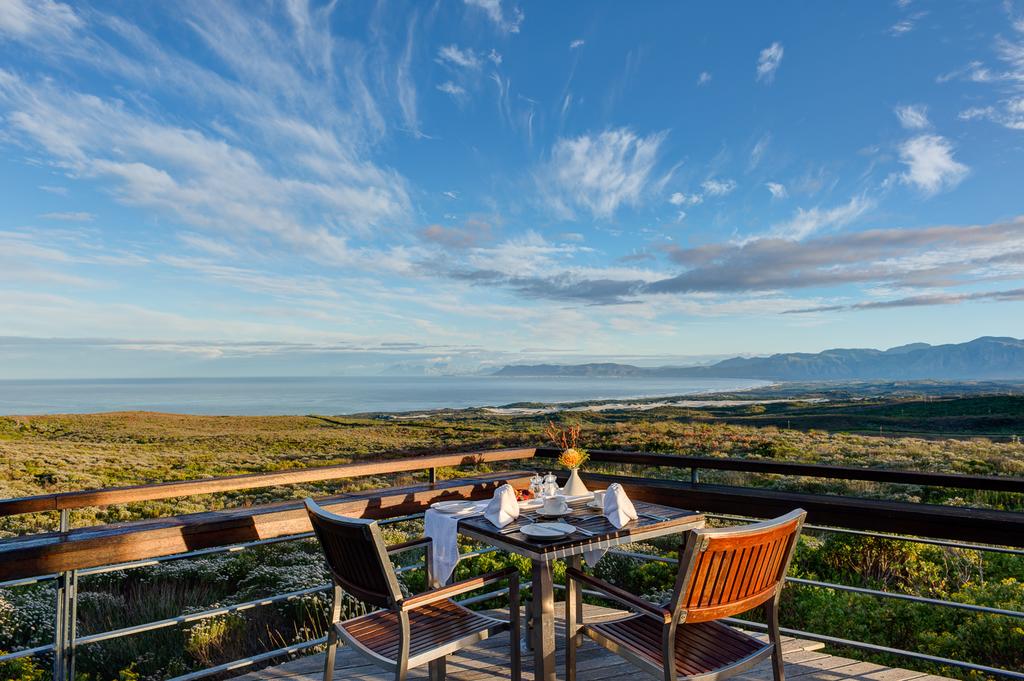 This family-run botanical nature reserve has attracted worldwide attention since the early 90s. Grootbos Private Nature Reserve started humbly as a small bed and breakfast, only to get transformed into a private nature reserve. Now leading in progressive luxury tourism, the Lutzeyers have changed the lives of the local community. In addition, they have continued to preserve their 2,500 hectares of treasured wilderness.

The future of the environment is important to Grootbos and eco-systems are a large part of the work they do. They invite guests to immerse themselves in their affectionately named “fynbos kingdom”. It’s their version of a safari experience, featuring over 800 plant species and 118 bird species, along with other animal species.

Grootbos is one of National Geographic’s Unique Lodges of the World and it’s no wonder! They offer one of a kind experiences to all guests who wish to discover more about nature. Grootbos wants to teach us all how we can help save the planet. Everything they do is with Mother Earth in mind, and it really shows. Leave Grootbos with an open mind and a happy heart: Rest assured you did something small to help the world.

From Kruger to Cape Town, there is a huge variety of safari experiences and a wonderful world of wildlife to discover. The question is, which one do you choose?

Alex writes for multiple travel blogs, lifestyle companies and photographs for various non-profit organisations in both South Africa and The UK. She has spent the past eight years travelling and working remotely with her rugby-mad partner and together, they have recently founded a non-profit rugby academy in South Africa. Alex loves coffee, discovering new places and sunset road trips across South Africa and beyond.

Any cookies that may not be particularly necessary for the website to function and is used specifically to collect user personal data via analytics, ads, other embedded contents are termed as non-necessary cookies. It is mandatory to procure user consent prior to running these cookies on your website. 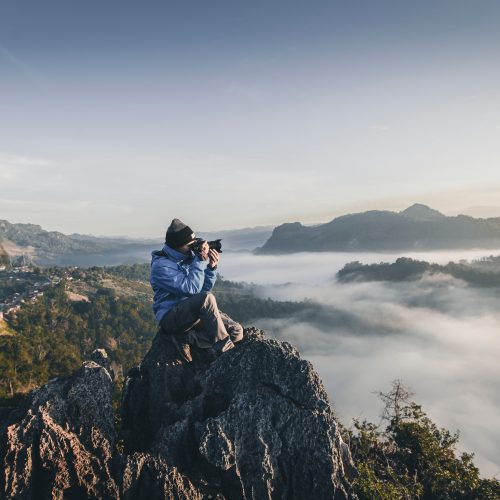 The Seven Best Travel Cameras In 2021

When it comes to deciding on the best travel cameras for your needs, there are a few factors that… 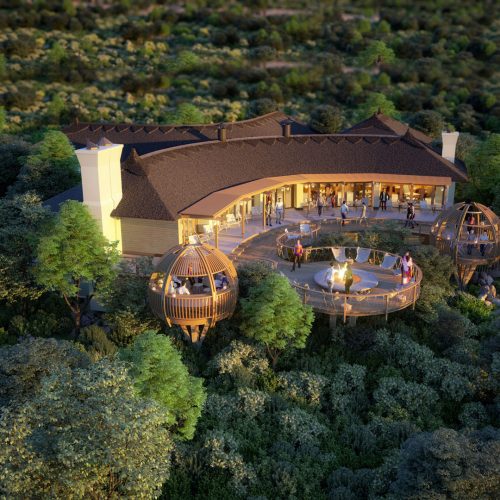 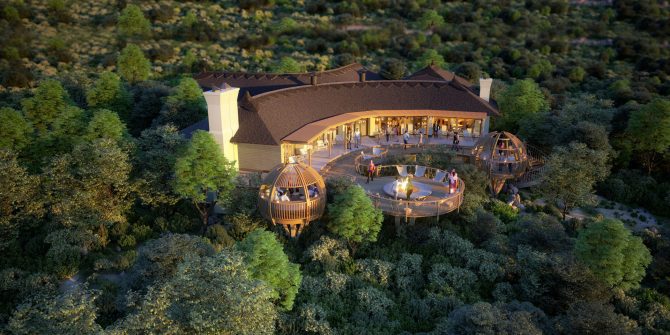